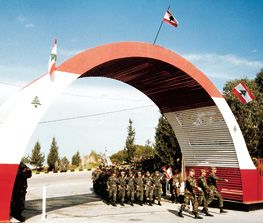 A former soldier who has served for minimum one full year in the one of the main institutions of the National Ministry of Defense, the General Office of the Superior Defense Council, in the Internal Security Forces the public security, the State Security Forces, the Customs, or the Police of the Parliament. As well as anyone who was demobilized from on of the mentioned institutions for health reasons.

Required Documents:
Concerning the previous soldiers in the main institutions of the Ministry of National Defense and the General Secretary of the Higher Defense Council:

Sons of parents who have lost one of them as a martyr in one of the main institutions or forces mentioned in the previous article.

A single child for his father or mother or for both of them or the son of the unknown parents:

It is meant by the lonely son:

A person is considered a single child in the following cases:

Remark : He will be yearly postponed until defining the lost brother situation by law.

Remark : He will be yearly postponed until defining the lost brother situation by law.

Clergymen who are practicing their religious duties, each one according to his religion: What is meant by a practitioner religious man, the one who is devoted to his practices for at least a full year before getting thirty three years old and wearing the correlative legitimate dress with this devote or without it.

For the Christians:
The archbishop of the bishopric or the head of the practicing clergymen is subject to it.

For the Moslems:
The legal opinion residence (Dar Al Fatwa) – The religious affairs directorate – The high Shiite Muslems council – or Jaafari Imam – the Druze chieftain residence or the creed judges.

A Person suffering from an incurable disease or from any disability preventing him from accomplishing his flag service.

A persons who has adjourned the date of his enlistment for medical reasons throughout 3 consecutive years because of the same disease.

A person sentenced to five years or more in prison

A person sentenced to be permanently deprived from his civil rights.

Lebanese citizens born prior to 1972 and the previous years in condition of not entering any correction to the birth date (for those who were born in 1973 and above) after the publication date of the decree number 3778 on 13/7/1993.

Persons who are freed from the Israeli jails, on condition that the period of the imprisonment is not less than three months.

Children or brothers of the martyrs of firemen and civil defense staff who were martyred during applying their duties.

The volunteer’s sons who were martyred in one of the institutions belonging to the ministry of national defense, the secretariat-general of the highest council of defense, the interior security forces or the public security.

The previous recruited who has finished the military duty in one of the friendly nations for a period that is not less than the Lebanese military service.

The family sustainer who is proved to assist his family for at least a year period.

The married, even if the marriage happened through the temporary exemption and which proves the verity of the marriage according to the law in Lebanon.
The marriage in this case should:

Those who live outside Lebanon including the Arab countries for minimum one year for their legal residence.
Concerning the concept of staying abroad:
The individual is considered staying abroad in the following cases:

Benefit conditions and mechanisms:
the present (or former) resident abroad benefits from a temporary renewable exemption for an entire year within the following conditions:

The employed whose employment is proved to be legal for at least one year.

The daily employees in the public institutions and administration:

The daily employees in the private institutions:
Required Documents:

The students who are continuing their high university studies in full time in one of the educational institutions acknowledged by the specialized ministries for at least one year period:

The brothers of that who is executing the military duty for a three person family and less.
One or two brothers of the called which one of the following situations applies to:

The rest of the children whose brothers are executing the military service in a three family individuals and more.
The rest of the called brothers (two) one of the following conditions applies to the situation of each of them: