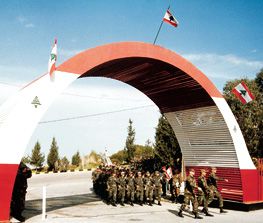 Ammendment of the Second paragraph, clause number 105 of the decree law number 102 issued in 16/09/1983 in such a manner that the paragraph reads the following:
"Reduction of the period of military service to six months until the conclusive cancellation stipulated in the first clause of this law"

It is possible, according to the army and the armed forces needs, to extend the service of the privates and noncommissioned officers after the conclusion of their compulsory service for a period which does not exceed five years in the same rank. The personnel shall receive a monthly wage equivalent to the wage of the enlisted soldiers or noncommissioned officers and all the regulations, which attend to the status of their service, shall be applied. The private who extended his service has always the right to terminate his service at the end of any of the extension years.

Modification of the first paragraph, clause number 109 of the decree law number 102 issued in 16/9/1983 and the modification reads the following:
"Postponement of the mobilization call to the military service for one renewable year according to the provisions stated in the paragraph number 1 of the clause 108 provided that the postponement period does not exceed the age of 33 years of the citizen’s age."

Modification of the article 2 of the clause 112, decree law number 102 issued in 16/09/1983 and the modification reads the following:
"The grant of precedence to those who executed the obligations of the military service to be enlisted in all the armed forces and the provisions of this procedure shall be specified in decrees adopted in the council of ministers."

The new stipulated provisions of this law are applied to those who execute the obligations of the military service in the date of enforceability.
Cancellation of the law number 310 issued in 03/04/2001.

Addition of the cases stipulated in the schedule attached to this law to the cases of final or temporary acquittal of the military service obligations.

Cessation of the prosecution of the defaulters of the military service and all the pursuits and sentences regarding them shall be dropped immediately after the issuance of this law.

All the legal and regulative texts incompatible with the provisions of this law or in agreement with its contents shall be invalidated.

All the paper work through postal communication via Liban Post

Following its previous release, the army command reminds the persons who have to perform the flag services that they are to finish all the paper work through postal communication via Liban Post with the following: