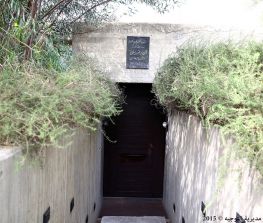 Visits to the Military Museum

The Idea behind the museum and the decision of erecting it

The idea of establishing a Military Museum came up shortly after the Independence and the reception of the Lebanese military units within the army of the French mandate to Syria and Lebanon, by national Lebanese authorities, on August 1st 1945. After the foreign armies evacuated Lebanon, the Army Headquarters considered, at that time, creating a committee in charge of writing the History of the Lebanese Army and safeguarding its Heritage, since 1947.

In fact, some contacts were made between the concerned parties, from the Directorate of Ruins to the National Education Ministry to the Interior Affairs Ministry, and the Municipality of Beirut, to grant it a piece of land of 22 600 m, located at the South of the actual Museum at the eastern side of the hippodrome, to construct a new building annexed to National Museum, specific to the Army, called “Museum of the Middle Ages and the Army”, with contents covering the period from the Middle Ages till the present times. The contacts continued on going now and again in the 1950’s and in the first 1960’s, till 1963 when the Ministers Council approved, in its session on August 7, to establish “ the Museum of Middles Ages and Army”, and the Executive Council of Construction Projects was assigned to work on executing the project of building the Museum, in accordance with the National Defense Ministry (the Army Headquarters) and the National Education Ministry (the General Directorate of Ruins).

After completing several studies, the foundation stone was set to build this Museum in 1968, the skeleton was constructed from its specified fund (one million Lebanese Pounds), and the construction stopped due to the lack of the necessary credits at the National Defense Ministry. The Museum was finalized later on, in the 1970’s, under the responsibility of the General Directorate of Ruins. In 1977, the building was lent to the Lebanese Public University after a decision from the Ministries Council, to serve as the headquarters of the University Presidency and administration, till 1998 when it became the headquarters for the Ministers Council meetings.

In the same year, a new building was built for the Museum next to the Ministry of Defense in Yarzeh, a small building with no capacity for all the ancient contents of military materials, wardrobe, and other. Thus, a part remained in the Military School Museum in Fayadyeh, and the other part in Rachaya Fortress in Bekaa West, and these are positions related to the main Military Museum in the Defense Ministry. On July 7 1998, by virtue of a telegraph issued by the Army Headquarters, the Military Museum was assigned to the Directorate of Orientation and considered as one of its divisions.

It is only few meters away from the main entrance of the Ministry of National Defense in Yarzeh .. The picture is more likely an artistic peninsula .. a square covered in green and brown, edged with an eight floor armed tower hoping for peace, while on the opposite side the land stretches away in half-circle, embracing their eternal martyr’s symbol.

The tower is nothing but a "hope for peace monument" designed and offered by artist Armen, as an incarnation of Lebanon’s national peace, at the occasion of Lebanese Army’s golden jubilee in August 2nd 1995. Facing is the “Immortal Monument” unveiled on the 22nd of November 1996 to perpetuate the Lebanese Army’s martyrs.

Two masterpieces seeking a third one to complete their circular aspects.. Few steps forward to see descending stairs with a green fence, leading to a huge door with a plaque , announcing : “ The Military Museum – Yarzeh “ founded on September 9th 1998, under the patronage of the army commander then, General Emile Lahoud.

The path downward announces a trip back to the roots that still carry a inexhaustible and unending history.

Then the oval building imposing awe with two small rooms separated by few steps, while the underground room leads to a physically disabled special entrance asserting that any one can take the tour.

A humble decoration revealing a subtle organization and coordination … history wraps the place … A history that confirms the liaison between the military aspect and the other human , and believes that life started with honor and goes on with sacrifice and loyalty … A history written in blood faithful to one country.

President Major General Fouad Chehab first welcomes the visitors once they turn right for the tour. His big black and white picture overhangs his uniform exposed in a wooden closet, with a French gun (7.5mm) and his sword, along all his other military equipment. The deep look in his eyes seems to be seeing in the first Lebanese army flag on the opposite wall an ever lasting walk towards Lebanon’s safety and security. That first flag was similar to the Lebanese flag, with two spikes holding its four corners, and the words “Honor” and “Home Land” crowning the cedar.

Old weapons are everywhere, bringing you back to times of which all you know is what you’ve read in history books… Swords and axes that were once weapons to test the soldiers’ courage in defending their homeland are hanging on the walls. Then fire guns, some working on firestones, some were used in the 19th century, some others were inscripted with “Mohamad Ali Pacha”, and some were decorated with Damascus style patterns, all working on “caps”. Guns from the two World Wars and others that have been developed into automatic weapons.

Pictures and paintings also are present inside. One of the paintings shows Officer Taleb Hbeich ( First Lebanese Officer at the Ottoman Empire) with his uniform and his fez.Two of the pictures show the Cavalry Battalion, first in 1937 with French Lieutenant Colonel Gomelin, then in 1950 with Captain Jadd.

High impressionism in describing the scenes shows clearly the duplicate of “Kana, Martyr’s Wedding” by artist Michel Sakr. The artist who believes the military institution is “Protecting the entity, sponsoring arts and keeping the patrimony, under the high patronage of President General Emile Lahoud and the command ship of General Michel Sleiman who is following his predecessor”, had offered this icon to the military theater, in care of its president Colonel Assaad Makhoul.

Created by Sakr in  memory of Kana martyrs, the icon  was first presented in Jbeil – Byblos, and then transported to the Parliament, where it was placed and given the “Shield of Kana”… “Kana, the historical memory that witnessed, 2000 years later, the transformation and resurrection miracle…

Inspired from the Lebanese authenticity, represented by the Cedar, Symbol of wisdom, perseverance and loyalty, with its roots immersed in the country protectors, bodies and in the soil, getting nourished and irrigated by the martyr’s blood. Under the Cedar, Civilians and Military, back to back, signing along the National Anthem, fighting with quills and swards, united by one country’s love. At the bottom, a martyr’s mother, holding her beloved son who was gone in the battle, with the pride and the dignity of a Lebanese woman, with no crying and no mourning. In her son she doesn’t see a dead man, but a transformation and resurrection miracle… He’s the military hero’s brother”.

But history doesn’t stop in the museum, the petition suggested by Captain Jamil Lahoud “General Major Lahoud” and signed by 41 Lebanese officers who decided not to serve but the Lebanese flag, is engraved on wood. This petition came in 1941 after the battle of Vichy’s French Army in Lebanon and Syria against De Gaulle troops supported by British troops, in which the Lebanese and Syrian Forces that belong to Vichy’s took apart. The Lebanese snipers Commanders objected to these measures and decided, as they signed the petition, not to intervene in the army conflict between the two French sides, and only defend their own frontiers against any invader.

Many other honorable texts are also found, namely a text of the Malikia battle in which a collision of Lebanese, Syrian and Iraqi militants, supported by young slave volunteers, succeeded in forcing the Israelis out of Al Malikia in May 15 and 16, 1948.

As for the modern military history, it’s also present through a number of service and discharge notes of which three are most remarkable. The first one is the decree No 3 issued on the 28th of November 1998, discharging General Michel Aoun from his duties and assigning Staff General Emile Lahoud as the Army commander. The second one is a service note issued on the 13th of June 1991 commanding to enroll 6000 members of Lebanese parties in the Army and Internal Security Forces and opening training camps for them. The third one invokes the legislative decree 102/83 and its amendments commanding to submit all Lebanese to the military service.

The military museum is a historical gate wide open to anyone who wants to revive a memory that is tired of being blurry.