Janus is a software of tactical combined arms simulation. It makes it possible to simulate a three dimensional environment where the aerial part is limited to actions of recognition or support of the troops on the ground carried out by drones, helicopters or planes. This software of the type “war game” makes it possible to simulate the engagement of several sides ( up to 6 ) with the possibility of alliances.

Initially developed in the USA, the software was provided to the French Army with its source code. It is the subject of regular improvements to meet the new needs.
Janus allows simultaneously implementing up to 10.000 pawns (tanks, VTT, Artillery, infantrymen, aircraft). The systems of weapons are described in a database which contains the whole characteristics of each system (speed, protection, possibilities of observation, possibilities of shooting, logistic capacities). These characteristics are used during simulation to make it as realistic as possible (management of: displacements, detections, shootings, consumptions ,…).
The pawns represent the various systems of weapons with which are equipped the players ( friendly and enemy units ).They are gathered in tactical units (groups, sections, companies, battalions) which confront during one or several plays, through data-processing simulation, and according to the orders given by the staffs.
Thanks to the “parameter setting” of JANUS, it is possible to create exercises on Lebanese ground, with the materials and equipment of the Lebanese army, by respecting the structure of the involved unit.
The implementation of JANUS requires a specific infrastructure: the center of simulation JANUS: Organized in various areas: command, life, players and simulation. The center makes it possible to receive players (trained PC), the animators (enemy PC, subordinate or adjacent units FRIEND/and ENEMY), JANUS operators (personnel of the center working on the simulation) and finally the personnel in charge of the direction of exercise (DIREX ).
Specific rooms make it possible to the players and animators to set up the cartography and the boards essential to the control of their operation.
They have various means of telecommunication and data processing, which make it possible at the time of the exercises to simulate in a realistic way the various networks (information, control, logistics)

USERS
The center of simulation “Janus” makes it possible to train in an optimal way, the tactical staffs up to the level of brigade, in a combined arms environment. It is also perfectly adapted to the training of the officers of the CGSC.

JANUS PYRAMID
The tactical center of simulation JANUS makes more realistic the acquisition and the implementation of the techniques of staff. It makes it possible to finalize the control of the method of tactical reasoning by issuing operation orders which “will be played” thanks to simulation. JANUS Center provides a teaching framework: modern, realistic and effective. 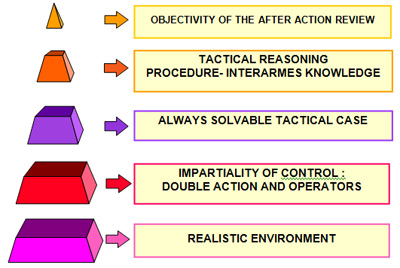 The AAR (After Action Review), led at the end of the exercise, makes it possible to take a real view of the operation and to draw useful lessons, for the future training sessions .

The new simulation system SWORD
As part of the ongoing cooperation between the French and Lebanese Army, France offered the new simulation system SWORD (Simulation Wargaming for Operational Readiness and Doctrine), and a certificate of use as a donation.
The installation of the program and the training of elements of the JANUS department started in August 2019 and the launch of the system on October 18, 2019.

Future goals:
In addition to using the Janus simulator, the new program will plan scenarios at the division and higher level, crisis management as well as the introduction of terrorist threats, natural disasters and place keeping operations, in order to improve decision-making planning process.